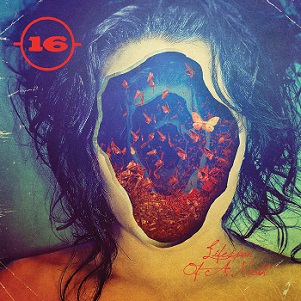 Mainly relevant for their solid standing in the underground throughout the fertile ’90s, Los Angeles crew -(16)- can rightfully assume the mantle of being one of the first to lock down the sludge-for-simplicity’s-sake sound. There’s a few albums of minor intrigue scattered across their 25 years as a band, most notably Zoloft Smile, which happened right before they went on a three-year hiatus, but for the most part, -(16)- has been too steady for their own good, something that comes across on Lifespan of a Moth, their seventh full-length to date.

The simplicity angle is what we’re going to harp upon, for the riff angles and shapes of Bobby Ferry usually don’t fall out of line. Straightforward, compact, and stout, Ferry’s bare-bones approach is able to carry “Peaches, Cream, and the Placenta” (yikes) and “The Absolute Center of a Pitch Black Heart.” His basic dirty Sabbath jousting pays off, especially on “The Absolute Center,” which is perhaps the album’s most mobile number. As with previous -(16)- releases, there’s a subtle morose thread running through the songs, but it’s never fully expanded upon. Thus, the slow churn and burn of “Pastor in a Coma” and closer “George” make for relatively tepid, and safe listens.

Four years in the making, Lifespan of a Moth finds -(16)- in the same spot as they were around Deep Cuts from Dark Clouds as one of the American underground’s least-elaborate, but prime example of a tried-and-true band whose yet to abandon their roots and original ideals. That certainly has credence in these band-flooded times, but on Lifespan of a Moth, there’s little, if anything to froth over.