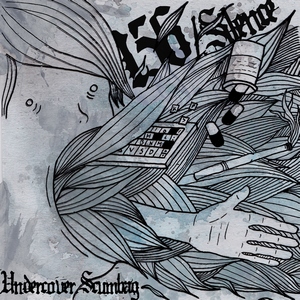 In the hardcore and metalcore scene, there’s not often a lot of room for experimentation. The straight and direct formula usually finding itself to be the easiest way of expression within music that usually sits at more the pissed side of things than dreamy. 156/Silence formed with more mellow, post-hardcore ambitions but transitioned into more metallic hardcore territory. Undercover Scumbag sits as more of a unique offering within the scene.

There’s something that hits with the title of the album, with a blunt directness to it. That quality can also be heard in the album, particularly with the jagged opening of “Fake It.” There’s an almost nu metal-esque guitar tone to be found, but fear not, it comes with a distinctive heaviness to it. Yet the following track, “Saving, Saved” has a more personal feeling to it – from the more lumbering guitar riffs to the emotive shouts (which admittedly may be a turn off to some) and dreary atmosphere, it’s obvious that 156/Silence does not want to be labeled a one-trick pony. Surprisingly, it works within the context of the album, even if it is immediately followed by a punishing bruiser in the form of the title track (check out the build-up to the breakdown). More cuts share this diverting pathway as the album progresses, from the more introspective yet heavy “Face Value” to the abrasive “Demonitized.” While this sort of shifting occurs, the album continues to roll along unhinged, resulting in the visceral conclusion of “Indecent Exposure.”

While it seems the band is going in a few directions at times, the end result is still a heavy and unique one. As the band continues to tweak this formula, they could be onto even more uncharted territory – which may be the most exciting prospect within Undercover Scumbag, short of its fully electric charge.