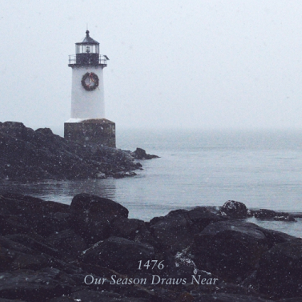 Stalwart German label Prophecy Productions wisely re-released 1476’s first three albums last year, subsequently introducing the Salem, MA outfit to a wider portion of the metal underground. The band’s blend of metal, folk, punk and outward storytelling is certainly an inviting one, particularly for those who hung on Agalloch’s every word, or for those with a simple interest in metal with a rigid, set angle devoted to a geographical area. In turn, Our Season Draws Near is the band’s fourth and certainly their best, capturing the duo of Neil Derosa and Robb Kavjian in full stride.

Whereas some of the band’s previous efforts relied heavily on acoustic guitar instrumentation and ambiance, Our Season Draws Near tilts toward the heavier side of the spectrum. This is evident on “Ettins,” a spirited, punk-throttled jaunt that works in a pulsating melody. The same bodes for “By Torchlight,” which would be a sure-fire indie rock hit if released at another time. The wistful, if not foreboding “Solitude (Exterior)” wrangles dark guitar work with melodic peddles, while “Solitude (Interior)” emerges as the album’s most diverse number, enabling throaty vocals, a study in contrast to 1476’s normally easy, melancholic vocal delivery.

The obvious depth and diversity of Our Season Draws Near further should establish 1476 as a wild-card folk/atmospheric metal force. There’s not one thing 1476 does better than the other; rather, the immediacy, Salem allure, and folk persuasion gives Our Season Draws Near its unique edge. You’d be hard-pressed to find something more distinctive than this so far in 2017.