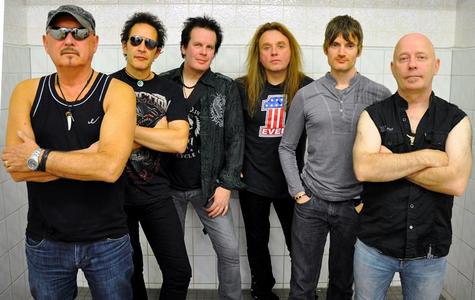 Veteran NWOBHM act Demon have held the metal flag high for nearly 40 years at this point. Their most thirteenth and most recent effort, Cemetery Junction, was originally released last year overseas via Spaced Out Music and is now available stateside through Clay Records/Restricted Release. We at DR are hosting the premiere of a 2-song video/mini-movie for “Someone’s Watching You” and the title track, which can be seen below.

It’s an elegant pairing of the two tracks, with “Someone’s Watching You” having a slightly spooky vibe that slowly builds itself up, centering itself on Dave Hill’s vocals. “Cemetery Junction” has that classic NWOBHM vibe with some hooky riffs and a melodic solo offering some balance with Hill’s strong vocal presence. As for the video itself, there’s a nice blend of the band playing alongside a classic horror tale that builds to an intriguing climax with an satisfying twist. To give away provide any further details there would deprive the viewer from the complete experience – check it out!

Of the mini-movie, vocalist Dave Hill states, “Demon are different, we’ve always been different, perhaps without ever knowing it, and I think John Williams interpretation of our 2 songs SOMEONE’S WATCHING YOU and CEMETERY JUNCTION taken from our latest album Cemetery Junction are different, it takes me back to my younger days and watching those early Hammer film classics from the UK, perhaps knowing what’s coming, but still surprised when it happens, I also had the great pleasure of recording our album unexpected guest at Bray studios where many of those early Hammer films were made, wonderful.”

Director John Williams adds, “Mike Stone, Demon’s Manager, etc first called me regarding a possible mini movie/music video for the band DEMON back in January we had a brief meeting/chat and being a fan of the band myself I was eager to be involved and put my experience in movie making, particularly horror movies, into the mix.”