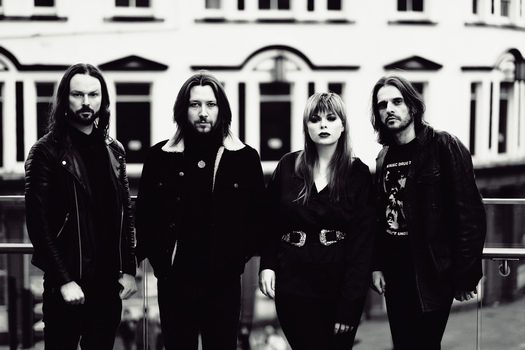 Doom and stoner fans rejoice, as we at Dead Rhetoric are pleased to partner with Heavy Psych Sounds to premiere the first sneak peak of Alunah’s upcoming album Violet Hour, in the form of “Trapped & Bound.” The album is set for release on October 11, 2019 through Heavy Psych Records, and can be pre-ordered HERE (or again at the bottom of the screen after you check out the track).

With a Sabbath-y good kick to the guitars and the soaring vocals of Siân Greenaway, “Trapped & Bound” gives a distinctive flair to Alunah’s latest release. Crunchy and addictive grooves are laced throughout the track, and provide an excellent contrast to Greenaway’s commanding vocals. Clearly hooks are king, and a later melodic solo in the track cements the whole thing as enjoyable from start to finish. As the first taste of the album, it leaves a good impression and a yearning to hear more.

Says the band:
The new material we have created is markedly more focused, and we feel that “Trapped & Bound” is a fine example of the infectious groove that has come to define the evolution of our sound. As the first song we wrote for the new LP, Violet Hour, it seems only too fitting that it spearheads the album.

Says the label:
On the heels of 2018’s critically acclaimed Amber & Gold EP, Alunah return with their brand new album titled Violet Hour, and the debut for Heavy Psych Sounds, who are proud to welcome the UK hard rock / doom heavyweights to their eclectic artist roster while joining label mates and high class acts such as Brant Bjork, Nebula, Nick Oliveri, Yawning Man among many more.

Violet Hour sees the energy of Alunah’s dark, doom tinged hard rock being cranked up with the arrival of guitarist Dean Ashton (bass, Diamond Head) alongside the soaring vocals of Siân Greenaway and rhythmic foundation of Dan Burchmore and Jake Mason. Recorded at the historic Welsh Foel Studio and produced by Chris Fielding (Conan, Electric Wizard, Primordial) these 8 tracks on display show the fruits of a productive early 2019 with a searing combination of melodies, riffs and focused writing. 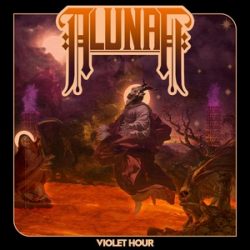 With their roots dating back to 2006 in “Sabbath City” of the UK and an evolution that has grown over four previous albums and numerous European tours and festival dates, the momentum now picks up the pace. A UK summer tour with The Obsessed and an appearance at this year’s prestigious Damnation Festival have just been confirmed with many more live dates as well as album tunes to follow soon!