February 2022 Album of the Month: Vio-Lence – Let the World Burn

Returning with their first showing of new material since 1993’s hit-or-miss Nothing to Gain, San Francisco Bay Area thrashers Vio-Lence have made up for lost time with the Let the World Burn EP. It’s our Album of the Month for an obvious reason, something Matt Coe was quick to explain in his review: 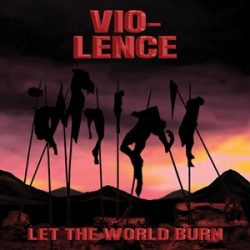 Wasting no time unleashing the jackhammer rhythms, melodic accents, and shifty bass/drum interplay, Vio-lence gets into locomotive obliteration mode for opener “Flesh from Bone” – the sadistic bark and maniacal howl from Sean Killian unmistakable in his uniqueness, not losing any potency after surviving his illness issues/ liver transplant. Perry Strickland intertwines his blitzkrieg, proficient fills and off-time abilities with this slamming sense of steady groove principles – you can hear both angles of his core style during “Screaming Always”, the main musical components almost synthesizing an updated look at the Eternal Nightmare period of the group. Properly slowing things down for a low-end churner “Upon Their Cross”, most will be hard-pressed not to slow wheel the headbanging frenzy, probably using the outside squeals and stop/start transitions for future stage driving, circular pit smashing good times. There’s not a weak cut out of the bunch – plenty of chunky riffs, relentless angst, and venomous lyrics to sink deep into your cranium, sharp and not missing a beat from what made Vio-lence endearing.

Choosing to drop EP’s for now as they want to get more roadwork under their belts is all right from this scribe. Vio-lence deserve this second chance at glory – Let the World Burn alerting any doubters that these musicians mean business and that the old guard of thrash still have plenty of new chapters to write for the genre.

Check out the full review at this location.