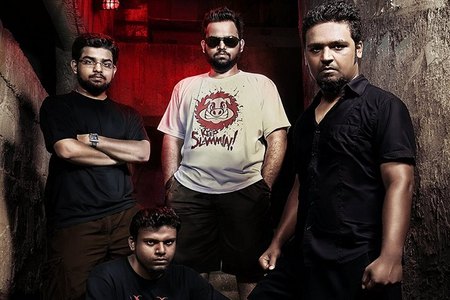 Being fans of brutal and groovy death metal, we at DR have teamed up to give you a taste of Mumbai, India’s Wired Anxiety and their upcoming EP, The Delirium of Negation. Due to be released on July 1st through Transcending Obscurity India, the band’s second EP is four slices of death metal that ooze heaviness and nod to the old and new schools of thought. You can check out a stream of the song, “Test Subject: Human” below. If you like what you hear, you can click the Bandcamp widget and pre-order the album as well as check out an additional song, “Heavily Sedated.”

“Test Subject: Human” wastes little time in ramping things up to the extreme. The EP’s opening song throttles the listener with some blastbeats before settling into some heavy grooves. The massive wall of groove is one of the band’s strongest assets, as you can also hear some thrash influences hidden beneath the death metal exterior. The middle of the track exploits this nicely, and then things really take off with a melodic and tasteful solo that adds another feather to the band’s cap before returning to some more traditional death metal flair. It gives you a good idea of how much impact Wired Anxiety can wield and you are going to want a few helping of this groove once you have a taste.