XANTHOCHROID: New Album “Of Erthe and Axen” in the Works 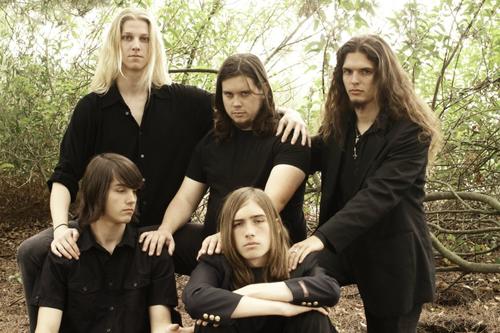 This year, Xanthochroid plan to release their second full-length album titled Of Erthe and Axen. The band is in the pre-production phases; compiling ideas, finalizing song structures, and recording demo tracks to prepare for rehearsal and recording.

Vocalist/keyboardist Sam Meador had this to say about the upcoming release:

“I’m really excited to finally be working on this album; some of the thematic material we are working with has been floating around for 7 years. It feels great to be solidifying and realizing these themes that I have been wanting to record for so long. Furthermore, this album is going to feature more input from other members of the band. Matthew (drummer/producer) and I worked very closely together on Blessed He With Boils, but this album will include more of his musical ideas as well as other members of the band (Brent, Bryan, and David).”

On the new album’s sound:

“So far, the guitar riffs in particular are much more raw sounding than on Blessed He; they seem colder, more drawn out and atmospheric. Conversely, our orchestrations are going to be much more articulate this time around thanks to some new software; as well as more study into counterpoint and orchestration.”

“The lyrics again will focus on the fantasy concept we have developed in the last two releases. The story on this album takes place before Blessed He and before Incultus. It describes Thanos and Ereptor as young men, and the struggles they faced growing up, growing apart, and realizing their destinies.”

Stay tuned for video teasers and info on single releases and release dates!

The album is expected to be released in Fall/Winter of 2014. Their previous releases can be heard and purchased at xanthochroid.bandcamp.com, you can follow the band at www.facebook.com/xanthochroidmetal. Keep watching us on YouTube

PS: Matthew Earl had this to say about the upcoming LP:

“The new album is going to be totally fine. It will sound completely acceptable, and will be available for purchase at some point for an amount of money.