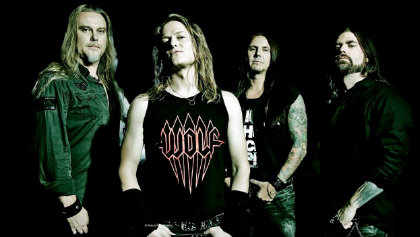 This time around, the band teamed up with Jens Bogren (KREATOR, OPETH) at Fascination Street Studios to deliver not only a heavy-sounding release but also one chock full of clarity and complexity. The cover artwork was once again created by Thomas Holm (MERCYFUL FATE, KING DIAMOND).

Fans will be pleased to hear that WOLF is not only still true to its musical ideal, but delivers a fresh and unique take on the sound that is their unmistakable trademark.

“I haven’t been this pleased with the songs on a WOLF album since the release of Black Wings,” says founding member Niklas Stalvind. “I really think we have taking our songwriting to the next level on this one and I hope that the metal fans will love it as much as we do.”

A short time after the new album’s release, WOLF will take to the streets with a tour of the U.K., with further European dates to be announced soon.

The first album teaser will be released in May, so keep your eyes peeled.