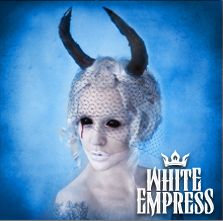 Twin-cities metallers WHITE EMPRESS have made a partial lineup announcement via YouTube in conjunction with the release of a new song, “Fall Of The Old Guard.” The announcement reveals Paul Allender (CRADLE OF FILTH), Chela Harper (ex-COAL CHAMBER) and Mary Zimmer (LUNA MORTIS) as members. More lineup details forthcoming.

Along with the unveiling of their new website, a free EP, entitled Obsession With the Empress, has been made available for download. The band is currently accepting donations on the site if listeners would like to contribute.

White Empress recently posted the new songs, “Exile (The Empress Returns),” and ‘Obsession With The Empress,” both streaming below.

“White Empress is the missing link that the metal scene is thirsty for. Her majesty is the all-seeing power; she’s your dreams and your worst nightmares. She’s the ruler of everything and she commands a legion of loyal followers. Come join her ranks and bask in her endless glory.”