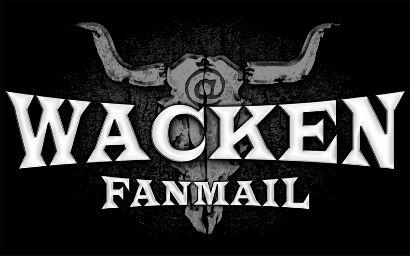 Ever meet a new friend at a festival that you really clicked with? Well now, the idea of being virtually reachable all year long is now a possibility for metalheads who attend Wacken Open Air. The organizers of Wacken Open Air have announced that the German e-mail service Mail.de will be offering Wacken festival goers e-mail addresses.

Fans will be able to combine their desired name with the ending “@wacken.de”. The typical Wacken layout of the service will generate the right festival feeling. Next to the distinctive and unique email address, there are many more benefits for the fans.

Manager of Mail.de Fabian Bock comments: “The online storage is 1 GB and it is possible to send emails with attachments up to 100MB. And of course, the Wacken Fanmail can be checked with mobile devices.”

Axel Kunkel, Mayor of Wacken shared: “We really like that the fans can identify even more with our village Wacken and the festival.”

The organizers of the Wacken Open Air, Thomas Jensen and Holger Hübner, are happy about this opportunity as well: “This is another way for our community to identify themselves with the village. And at the same time they support heavy metal newcomers and their holy Wacken land.”