Wacken Open Air To Be Focus Of 3D Documentary 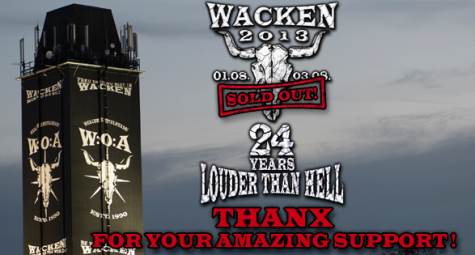 Wacken 3D – Louder Than Hell, a no-holds-barred exploration of the legendary Wacken Open Air, the biggest heavy metal festival of the world, will shoot in July and August this year. Director Nobert Heitker’s feature documentary, shot by producer and director of photography Tomas Erhart in stereoscopic, “true” 3D will give audiences a chance to experience Wacken — the fans, the music, the unique atmosphere — in the most intimate way.

Wacken is a true one-off. Beyond description. Every year, for three days in August, a sleepy farming village in the middle of the Northern German countryside becomes the epicenter of the metal universe. Almost 75,000 metal heads from around the globe invade the Wacken Open Air to pay homage to the greatest bands of the international metal scene.

The first Wacken Open Air in 1990 attracted less than 800 attendees but since then it has grown every year. Now it is the biggest open air festival of its kind. Tickets are sold out within days — long before all of the participating bands are announced.

Much has been written and documented about the festival. But what exactly makes Wacken so special? What gives it its magic — its soul? It is hard to answer these questions in mere words or anecdotes. If you want to understand Wacken you have to experience it.

Wacken 3D – Louder Than Hell will allow audiences to do precisely that, taking them right into the thick of it. Norbert Heitker, Tomas Erhart and their team will cover this year’s complete Wacken Open Air around the clock, using 18 state-of-the-art 3D cameras. The film will go way beyond the POV of the normal festival attendees. It will take the audience backstage to meet the bands before they perform, watching the faces of thousands of excited fans, feeling the crowd-surfing up close. The cameras will cover through the metal battles and the oompah music of the “Wacken Firefighters.” And, of course, an intimate portrait of the festival fans — their stories, their outifits, their tents, and how they party.

“Wacken 3D” will, of course, be filming the pivot of these three days — the humongous stage shows of the greatest metal bands on earth.

Norbert Heitker has many years of experience under his belt, directing music films and commercials. He has won numerous awards and accolades, including two Echos for films with the bands RAMMSTEIN and DIE ÄRZTE.

Wacken 3D is produced by Tomas Erhart of Jumpseat 3D Plus Germany, who is also the director of photography, and Stefan Schubert of Wüste Film. The production is backed by Medienboard Berlin-Brandenburg, Filmförderung Hamburg/Schleswig-Holstein, Filmförderungsanstalt and Deutscher Filmförderfonds.