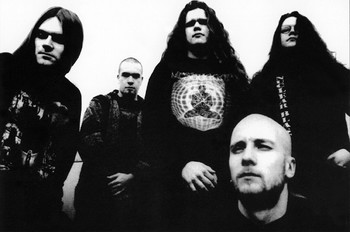 The actual recording of this video is unclear (it has to be a television performance from either 1994 or ’95), but it catches Sweden’s Meshuggah in a time when they had no peer, as in, no other bands to contend with in staccato-land. The song in question is “Humiliative,” the lead track from the band’s 1994 None EP.

Its pattern, like most Meshuggah songs, is off-kilter, but no less crushing when it enters into a mad-capped verse. Jens Kidman (love the hair) is clear and convincing, while the astral leads of Fredrik Thordendal were unlike anything going at the present time – Holdsworth-like, but even more daring. Not counting the excellent visuals and fashion, this is a perfect snapshot of the Swedes prior to them blowing up with Destroy.Erase.Improve. It’s always cool to catch a band before their dramatic ascent – this is definitely it for Meshuggah.