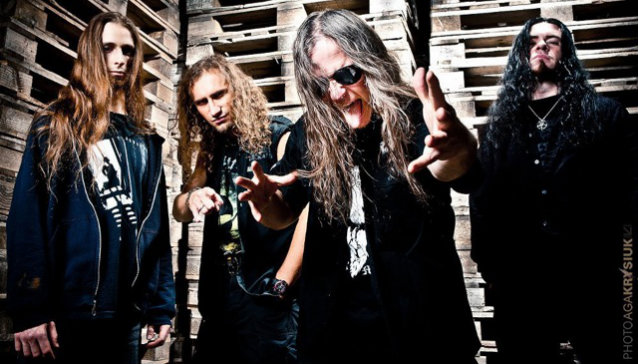 The official lyric video for the song “Where Angels Weep” from Polish death metal veterans VADER can be seen below. The track is taken from the band’s new album, Tibi Et Igni (a Latin phrase which translates to “For You And Fire”), which will be released on May 30 via Nuclear Blast. The follow-up to 2011’s Welcome To The Morbid Reich was recorded at Hertz Studio in Bialystok, Poland with producers Wojtek and Slawek Wiesawski. The artwork was handled this time by a true legend of visuals, Joe Petagno (MOTÖRHEAD).

Tibi Et Igni will be made available as a standard jewelcase CD, digipak (with 2 bonus tracks), as colored vinyl with a bonus seven-inch EP (including 2 bonus tracks) and exclusively at Nuclear Blast mailorder as a limited digipak edition with a signed VADER tourbook.

VADER will release a special seven-inch single containing two tracks from Tibi Et Igni. The single is titled Go To Hell and includes the following songs:

The song “Where Angels Weep” will also be made available digitally.

The vinyl and the digital version are being released on April 18 via Nuclear Blast.

You can pre-order the single (red, white and black vinyl) at this location.

VADER’s latest album, Welcome To The Morbid Reich, was released in Europe on August 12, 2011 and in North America on September 13, 2011 via Nuclear Blast Records. The effort was recorded at Hertz Studio in Bialystok, Poland and features the cover artwork of Zbigniew Bielak (DESTRÖYER 666, WATAIN). The band laid down a total of 12 songs for the CD, which was mixed and mastered in May 2011.