UNLEASHED: “Dawn Of The Nine” Album Due In April

Long-running Stockholm death metal crew UNLEASHED will release Dawn of the Nine on April 24 via Nuclear Blast. The cover artwork was created by Pär Olofsson (IMMORTAL, DEMONAZ, EXODUS) and can be seen below.

Comments UNLEASHED frontman Johnny Hedlund: “The artwork represents the continuation of our previous album, which ended with ‘The Great Battle Of Odalheim’. The battle took place at Uppsala fields in Sweden, and you can clearly see the ‘kings graves’ at the cover artwork, which is present at Uppsala also in the future. You can also see the bombed out church in the far distance. Then, of course, you see the place of Blot in the front and the rune stone with the runic symbol of courage of the new dawn.”

Dawn Of The Nine track listing: 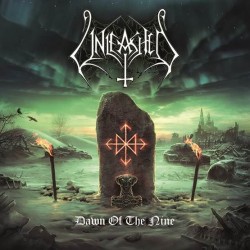