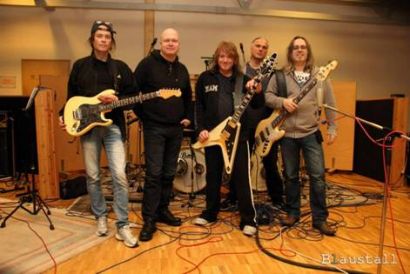 After a very silent year in 2013, UNISONIC are working on their second album. Singer Michael Kiske (ex-HELLOWEEN), guitarist Mandy Meyer (KROKUS), bassist Dennis Ward (PINK CREAM 69) and drummer Kosta Zafiriou entered the Hofastudios at the beginning of January for early rehearsals. The second rehearsal occurred at the end of January with guitarist Kai Hansen (GAMMA RAY, ex-HELLOWEEN) completing the full line up at the follow-up rehearsal.

“I have already written three songs with my friend Sandro Giampietro. I was under so much pressure because I thought I had to do more. Kai is so busy with GAMMA RAY… but suddenly Dennis comes up with one great song after the next. It’s amazing. I wasn’t expecting this. He had sent me at least eight or nine tracks – great vocal lines and melodies – it really excites me.”

“Full force now into the next UNISONIC production! I’ve never had such an efficient pre-production/songwriting session in my career. UNISONIC is also proud to announce that onboard for this production we will be having Vanden Plas’s own Günter Werno working on the keyboards. I’ve done many many productions with Günter and I’m happy to have him with us. It’s always a pleasure.“

The band’s self-titled debut was released in 2012.