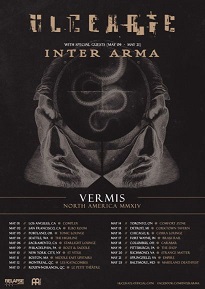 In support of their most demoralizing recorded works to date with their fourth LP, Vermis, New Zealand death metal innovators, ULCERATE, will bring their audio terror to North American fans this spring, on their second tour of the continent.

ULCERATE will inundate the American and Canadian peoples for nineteen days and nights on the Vermis North America MMXIV tour, which will include the band’s first shows on the West Coast. Beginning the first day of May, the horde will bring their incredibly destructive, dynamic style of delivering the most extreme, cutting edge death metal imaginable to a clockwise arc of cities, the mayhem coming to a close with a performance at the massive, annual Maryland Death Fest on May 19th.

Support for ULCERATE will be provided by Relapse lablemates, INTER ARMA, on the majority of the dates, joining the tour in Philadelphia on the 9th and pushing through until May 21st, the final date of the tour before MDF.

Stated the band on the upcoming live incursion, “After months of planning we are now in full lockdown mode with rehearsals for what is going to be one of the most intense tours we’ve done to date. We can’t wait to bring the Vermis material to life and finally attack both East and West coasts of the continent – particularly with INTER ARMA, joining us for the second half of the run.”