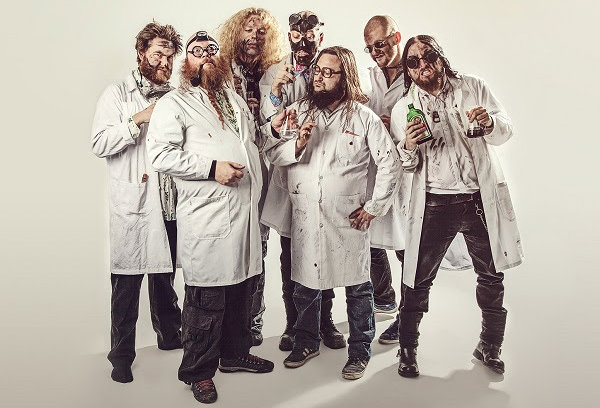 Fresh from celebrating their tenth anniversary and with two North American tours in one year under their belts, Norway’s TROLLFEST are starting 2014 by announcing details of what will be their sixth full-length album as well as details of their first headlining European tour.

The 13-track album will be titled Kaptein Kaos and is expected to appear on NoiseArt Records on March 28. Recorded at the dUb Studio in Oslo and at the Trollskogen Recording Facilities, the CD was mixed by Endre Kirkesola. Once again the striking artwork is by Swedish cartoonist Jonas Darnell and design by Terje Johnsen, both longtime collaborators with the band.

Like previous albums, Kaptein Kaos is set in the fantasy world of Trolls created by TROLLFEST. It tells the story of the Kaptein Kaos, who, according to the band “is an inventor who creates a time machine and goes on an expedition across time to see some sights, taste some stuff and have some fun in ways that are exclusively available to people with time machines.” Musically, though, it seems that this time TROLLFEST have slightly changed direction. “Blasts beats and screaming,” says the band, “have given way to juicy rock grooves and rich melody lines, and the world music influence, which has been our trademark both in our use of instruments as well as melodies, has expanded to include Tango rhythms, Asian and Scandinavian folk music as well, of course, as the East European influence for which we are known.”

KORPIKLAANI’s Jonne Järvelä, one of the first people to hear the album, had this to say about it: “TROLLFEST are even more catchy, more melodic and more twisted than ever with their new Kaptein Kaos album. I really like its (good way) sick arrangements and instrumentation. Vocals are extremely variable and I never heard anything like this before. My personal highlight on the album is a song called ‘Solskinnsmedisin’. Unbelievable album!”

To mark the release of the album TROLLFEST will embark on a 16-date headlining tour of Europe in April, which the band have dubbed the “Kaos Over Europe Tour”, supported by FINSTERFORST and CRYPTIC FOREST.