THE HAUNTED: New Video Update From The Studio 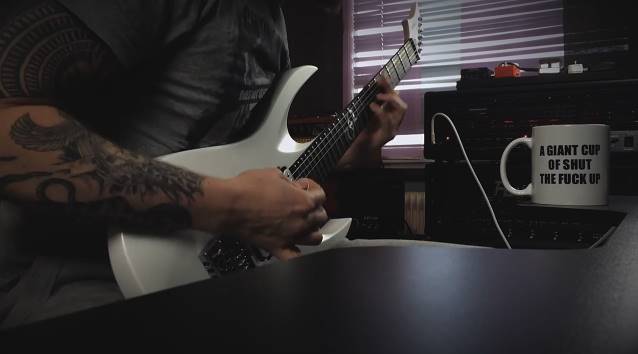 A new video message from guitarist Ola Englund regarding the progress of the recording sessions for the new CD can be seen below.

THE HAUNTED released a new three-song single, Eye Of The Storm, on January 20 in Europe and January 21 in North America via Century Media Records.

Eye Of The Storm was made available as limited-edition seven-inch EP (1,000 copies split as follows: 500 on black vinyl, 300 on red vinyl and 200 on white vinyl) and as digital single, featuring the new songs “Eye Of The Storm”, “Infiltrator” and “My Enemy”.

Eye Of The Storm track listing:

THE HAUNTED’s founding member and guitarist Patrik Jensen stated about the band’s new lineup: “THE HAUNTED went through some difficult times last year. Losing three band members is a pretty huge blow to any band. Jonas and I agreed immediately that we wanted to continue with the band, but we wanted to take our time and not rush into anything.

“Some of you might recognize a few faces, some of you might not. Adrian Erlandsson is back on drums and Marco Aro is back on vocals. Adrian you might know from playing on our first album and Marco sang on The Haunted Made Me Do It, Live Rounds In Tokyo and One Kill Wonder. On guitar we also have Ola Englund bringing some pretty heavy chops to the band.”

Vocalist Marco Aro (ex-FACE DOWN, also in THE RESISTANCE) was previously involved with THE HAUNTED for three acclaimed releases between 1999 and 2003 as well as for several worldwide touring campaigns. Drummer Adrian Erlandsson (also in AT THE GATES and PARADISE LOST) belonged to the original lineup of THE HAUNTED together the Björler twins after the demise of their previous legendary group, AT THE GATES. Together with Jensen, they launched THE HAUNTED’s self-titled debut in 1998, an album which has been widely considered as the kick-start for a new era in the thrash metal movement and which, despite its initial underground status, climbed to be a massively inspirational record for a whole new generation of musicians and bands in the following decade. Guitarist Ola Englund is a highly talented young player from Sweden, who has recently been active as touring and recording member of U.S. death metal institution SIX FEET UNDER.