THE GENTLE STORM Reveals Album Artwork For “The Diary”

THE GENTLE STORM, the collaboration between AYREON mastermind Arjen Lucassen and former THE GATHERING singer Anneke Van Giersbergen, has posted the cover art for its debut, The Diary.

The Diary cover artwork can be seen below. Arjen said: “I loved the front cover of the last STREAM OF PASSION album, so I tracked down the cover artist, Alexandra V. Bach. I sent her some samples of the THE GENTLE STORM music, and explained the album concept. She made a moodboard that captured the feel of the story and the music. We then gave her the go-ahead to design the cover. She did an amazing job that exceeded our expectations: Alexandra’s cover art represents THE GENTLE STORM perfectly!” 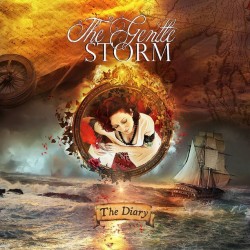