Wholly underrated Swedish death metal outfit THE DUSKFALL will release Where the Tree Stand Dead on November 21 in Germany, Switzerland and Austria, November 24 in UK and the rest of Europe, and on December 2 in North America via Apostasy Records. The album was recorded at Tico Tico Studio in Kemi, Finland and was mastered by Ahti Kortelainen (SONATA ARCTICA, MOONSORROW, SENTENCED). The artwork was created by Gustavo Sazes (ARCH ENEMY, MORBID ANGEL).

Says a press release: “[‘Where The Tree Stands Dead’] marks the band’s return to the scene after seven years of silence and delivers all the strengths of the Swedish metallers! Intense guitar solos, unforgettable melodies and brutal death / thrash riffing are the most obvious elements of the band’s style. Above all soars the aggressive, yet emotional voice of Magnus that gives a very special edge to anthems like ‘Endgame’, ‘Farewell’ or ‘We The Freaks’. 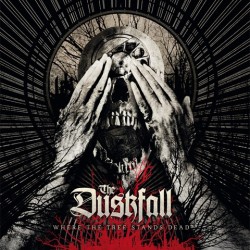