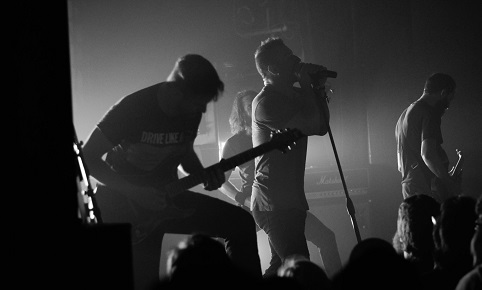 The fifth full-length album from the New Jersey-based band THE DILLINGER ESCAPE PLAN titled, “One Of Us Is The Killer” is now available for streaming in its entirety here. The CD will drop tomorrow, May 14, through Sumerian Records in North America.

One Of Us Is The Killer was recorded in Southern California with longtime producer Steve Evetts (GLASSJAW, THE CURE, SUICIDE SILENCE), mastered by Tom Baker (DEFTONES, NINE INCH NAILS, BEASTIE BOYS and further production was done at founder/guitarist Ben Weinman’s studio.

Vocalist Greg Puciato stated the following about the direction of the new material: “I can hear (the influence of old punk and hardcore records) a lot. I can definitely hear that in some of the riffs, which are really aggressive. It’s not a blatant hardcore record or anything like that. I actually think this is the most all over the place and weirdest record we’ve ever written. It’s the first one since I joined the band where Ben has sent me songs and I’ve been like, ‘What the fuck is happening? This sounds like a beehive!'”