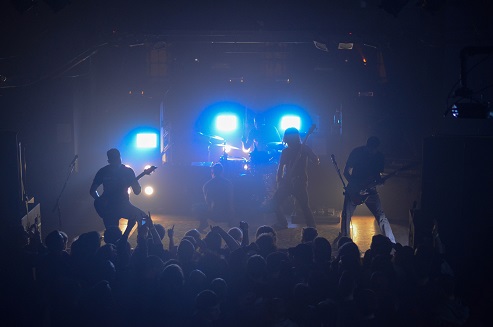 New Jersey-based act THE DILLINGER ESCAPE PLAN has announced the cancellation of its summer European tour dates due to a broken hand suffered by the band’s guitarist, Ben Weinman. THE DILLINGER ESCAPE PLAN performed as a four-piece at the Orion Music + More festival in Detroit, Michigan this past weekend. A photo of Ben Weinman observing the live show from the side of the stage in a chair may be seen below.

THE DILLINGER ESCAPE PLAN’s fifth full-length album, One Of Us Is The Killer, sold roughly 15,000 copies in the US in its first week of release to debut at position No. 25 on The Billboard 200 chart. The CD was released on May 14 through the band’s own Party Smasher Inc., in partnership with Sumerian Records in North America. Party Smasher’s partnership with BMG covers the rest of the world.

One Of Us Is The Killer was recorded in Southern California with longtime producer Steve Evetts (GLASSJAW, THE CURE, SUICIDE SILENCE), with additional production at guitarist/co-founder Ben Weinman’s studio. Mastering was handled by Tom Baker (DEFTONES, NINE INCH NAILS, BEASTIE BOYS).