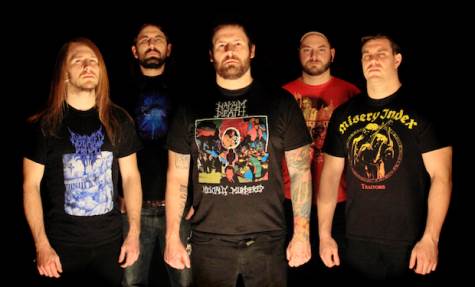 Michigan’s death metal band THE BLACK DAHLIA MURDER have unleashed another brand new track entitled, “Raped In Hatred By Vines Of Thorn”,  which may be streamed below. The new song comes off their sixth full-length album, “Everblack“, which will be released on June 11 through Metal Blade Records. Also available for streaming below is the third track, “Into The Everblack”.

The CD was recorded at Audiohammer Studios (lead guitars and vocals), Rustbelt Studios (drums), and Regal Fecal (guitar and bass). Jason Suecof and Ryan Williams mixed the album while mastering was completed by Alan Douches at West West Side Music (SEPULTURA, SUFFOCATION, UNEARTH) in New York. Vocalist Trevor Strnad’s horror-inspired lyrics remain relentless on “Everblack“, starting with the first track, “In Hell Is Where She Waits For Me”, which refers to the murder from which the band took for its title. The cover artwork was painted by artist Nick Keller.

The vocalist comments: “The opening track is the first actual song we’ve done about the Black Dahlia. This one is for the fans… they’ve been asking for this to happen for a long time. The story takes place at the Elizabeth Short’s rain drenched funeral, where her killer in attendance… just one of the many macabre tales woven into the fabric of ‘Everblack‘. Subterranean flesh-farming vampires, vine rape, Jeffery Dahmer, amputation… it’s all here! With this sixth slab of sickness I tried my best to honor the band’s legacy and write lyrics that will keep the legions of horror fiends perspiring with fear.”

Fans can grab “Everblack” on a triple gatefold double LP with purple/white marbled vinyl, along with “crime scene” bundles. An evidence pack, which includes toe tags, deceased band member photos, spent shotgun shells, and more can be viewed now.  All are available at Metalblade.com