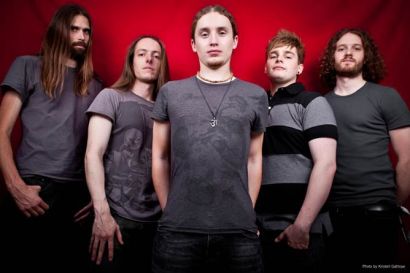 U.K. djent champs TESSERACT have posted the video for “Nocturne,” a song from their 2013 album, Altered State. The video, directed by Ben Thornley for Sitcom Soldiers, can be seen below.

The band comments on the video: “As we haven’t taken part in our promo videos for a while we felt now was the time to make an appearance. But, we also wanted to create a journey with the video that was similar to the journey portrayed by the music. A pretty straight forward step from the night, what it hides and the fear it generates, into the reassurance and safety of the dawn. We have always really liked the idea of creating silhouettes (we tried to something similar with our first video, ‘Deception’), so we decided upon using back lights for the majority of the video, which is then reversed when the feeling of the music changes towards the end of the track. We feel the guys at Sitcom Soldiers have really captured the mood of the song, and also produced a video that draws you in.”

Ben Thornley who produced the video for Sitcom Soldiers: “Working with TESSERACT for us was about capturing something which did a great song justice with a memorable performance, whilst providing an equally provocative atmospheric narrative. The band naturally looked great and the creative process went very smoothly and shows in the final video.”

TESSERACT are currently on a US tour with KATATONIA, CULT OF LUNA and INTRONAUT and then immediately venture off in a headlining run with SCALE THE SUMMIT throughout North America. Next up are Mexico, the UK with KARNIVOOL as well as a trip to India. 2014 kicks off on the road with in Europe and UK with THE SAFETY FIRE, PROTEST THE HERO and INTERVALS before TESSERACT are part of the Soundwave Festival in Australia.