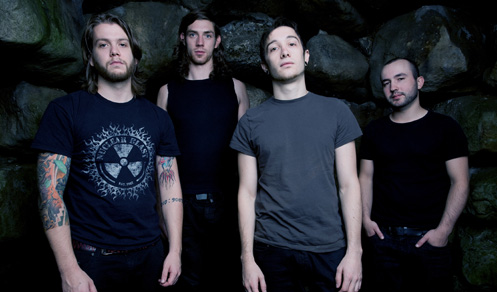 British metallers SYLOSIS have reportedly been forced to drop off their North American tour with TRIVIUM, DEVILDRIVER and AFTER THE BURIAL after being involved in a serious RV accident last night. DEVILDRIVER frontman Dez Fafara broke the news via Twitter, explaining that SYLOSIS “ran into the back of a tractor trailer full speed” and “totaled the RV,” landing three of the members of the band in a local hospital. He added: “My thoughts go out to those guys. This is so sad! Send positive thoughts, everyone.”

SYLOSIS’ latest album, Monolith, was recorded with Romesh Dodangoda in Wales at Monnow Valley Studio and was mastered by Jens Bogren (SOILWORK, AMON AMARTH, BLOODBATH) at Fascination Street Studios. The concept for the lyrics were loosely inspired by the Greek tale of Orpheus and Eurydice. The artwork was created this time around by Dan Goldsworthy (ACCEPT, HELL).