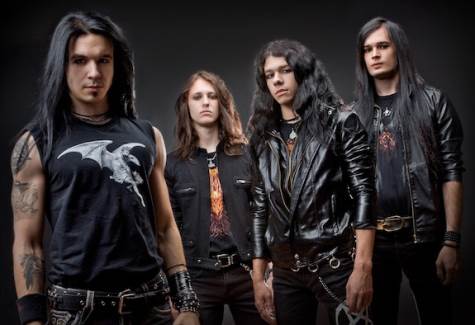 Chicago based metal band STARKILL have a brand new song, “Whispers Of Heresy” available for streaming here. The track comes off the group’s full-length album, “Fires Of Life”, a unique blend of symphonic black metal, power metal, and melodic death metal and will make its Century Media Records debut on April 29 in Europe and April 30 in North America. Joshua Belanger, a renowned metal artist, has created the artwork for the CD and it definitely characterizes the electrifying musical stylings of STARKILL.

STARKILL was formed near the end of 2008 by Spencer Weidner, Charlie Federici and Parker Jameson. The band has no regrets about wearing their influences on their sleeves. Clearly passionate, they combine what they love — melodic death metal, shredding guitars, blasting drum beats and make some of the most promising metal heard in North America in years.

Promptly after “Fires of Life” is released, STARKILL will tour with HYPOCRISY, KRISIUN, ABORTED, and ARSIS. Headlining and supporting shows after their stint on the trek will shortly follow.

“Fires of Life” tracklisting:
Whispers Of Heresy
Fires Of Life
Sword, Spear, Blood, Fire
Below The Darkest Depths
Immortal Hunt
New Infernal Rebirth
Strength In The Shadow
This Is Battle; This Is Our Day
Withdrawn From All Humanity
Wash Away The Blood With Rain