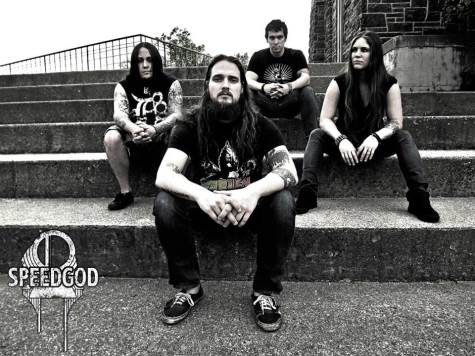 Michigan based metal band SPEEDGOD, featuring former KITTIE bassist Ivy Vujic Jenkins among their ranks, have three tracks streaming. The three tracks come from their demo titled, The 2013 Demos, and are available for streaming below. SPEEDGOD features Sean Von Tersch (ex-DEEPFIELD) on guitar, Ivy Vujic Jenkins on bass, Miles Green (ex-BETWEEN YOU AND ME, MYTHS AND LEGENDS) on drums, and Geoff Jenkins (ex-GWEN STACY, ONCE NOTHING) on vocals.

SPEEDGOD debut live on June 7 at Uli’s Haus Of Rock in Lansing, MI. The band will be giving away The 2013 Demos for free to anyone who wants it. Physical copies of the demo will also be available for free on the SPEEDGOD web site beginning tomorrow (June 6) at 6 p.m.