After some triumphant live debut shows in their newest incarnation supporting Bolt Thrower and Morgoth, Dutch blackened death doom metallers SOULBURN, are getting ready to release their sophomore album, The Suffocating Darkness, via Century Media Records on November 17th. Check out “Under The Rise Of A Red Moon” from the album, streaming below.

SOULBURN drummer Bob Bagchus (ex-Asphyx) had to say about the track: “This track shows well what SOULBURN is all about: cold, dark and grim blackened doom/death metal. “Under The Rise Of A Red Moon” is furious and contains all the elements we love the most about metal. This song also shows that one does not need many riffs to create a grim atmosphere…this is a mid-paced assault with a pure and heavy 80’s feel, just how we wanted it!”

The Suffocating Darkness was recorded with Harry Wijering (Harrow Productions) and mix/mastering duties were taken over by Dan Swanö (Unisound Recordings). The artwork was designed by Timo Ketola (Watain, Deathspell Omega) and additional artwork was provided by Roberto Toderico (Sinister, Asphyx).

Originally, SOULBURN emerged after the demise of Dutch death metal legend Asphyx in the mid 90’s, when founding members Eric Daniels (guitars) and Bob Bagchus (drums) looked for a seperate outlet to unleash their mutual obsession with Bathory, Venom, Celtic Frost and unite it with a dark, doomy and primal death metallic twist. After a demo and the cult Feeding On Angels debut album via Century Media Records in 1998, which featured Wannes Gubbels (Pentacle) on vocals/bass, SOULBURN were put to rest and seemed to be a mere transitional act before Asphyx achieved a short-lived return for On The Wings Of Inferno (2000) with the same lineup.

SOULBURN was dead, buried, but not forgotten…

And now, 16 years after their debut album, the blackened death metal merchants return to the surface in their new lineup shape that again features the core of Eric Daniels (guitars) and Bob Bagchus (drums), teaming up with Twan van Geel (Flesh Made Sin, Legion Of The Damned) as vocalist/bassist and Remco Kreft (Grand Supreme Blood Court, Nailgun Massacre, Xenomorph) as second guitarist. 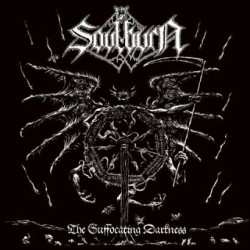