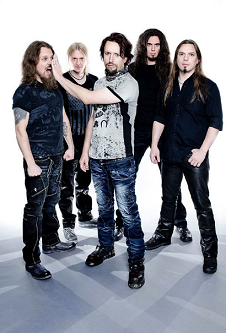 SONATA ARCTICA’s long time bass player Marko Paasikoski left the band due to personal reasons at the end of August. Pasi Kauppinen (SILENT VOICES, ex-REQUIEM, WINTERBORN) has now taken over the low-frequencies for the band. Below is the first official promo shot of Sonata Arctica’s new line-up.

Keyboardist Henrik Klingenberg recently checked in with the following update:

“Hola People! Just wanted to let you all know that we’re alive and well and the new album is under work. We’re really excited to enter the studio to start recording our new stuff. Enjoy the fall and keep the metal alive!”

SONATA ARCTICA recently released a video clip to their song ‘Alone In Heaven’, taken from their latest album, Stones Grow Her Name. Released on May 18, 2012 via Nuclear Blast, Stones Grow Her Name achieved gold status in the bands’ home country after just one week and additionally entered charts worldwide. Among those entries were the top 5 of Sweden Rock Charts (#5), Canada Rock Charts (#7) and UK Rock Charts (#9) and the record debuted at #9 of the US Billboard Heatseeker Charts.