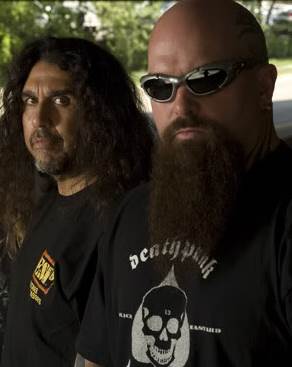 SLAYER guitarist and metal legend Jeff Hanneman passed away on May 2 from liver failure at the age of 49.  Today, SLAYER vocalist/bassist Tom Araya and guitarist Kerry King have released the following statement to their fans across Europe:

“We know that our fans everywhere are hurting for the loss of Jeff (Hanneman, SLAYER guitarist) just as we are. We want to let you all know that when we come to Europe this summer in June, July and August, we’ll ALL be making noise together for our brother and dear friend, Jeff… We’ll see you then!”

Hanneman had not been playing with SLAYER for more than two years since he contracted flesh-eating disease, namely necrotizing fasciitis from a spider bite in his backyard in January 2011. The infection ravaged the flesh and tissues of Hanneman’s arm, leading to numerous surgeries, skin grafts and intense stints of rehab that forced him into semi-retirement and left him near death at several points. Hanneman appeared last with SLAYER in April 2011 when he joined the legendary quartet to play an encore at the “Big Four” concert in California.

SLAYER drummer Dave Lombardo also sat out the band’s recent Australian tour due to a contract dispute with the other members of the group.  SLAYER tapped Jon Dette (TESTAMENT, ANTHRAX) to man the drums in place of Lombardo.