SICK/TIRED Ink Deal With A389 Recordings 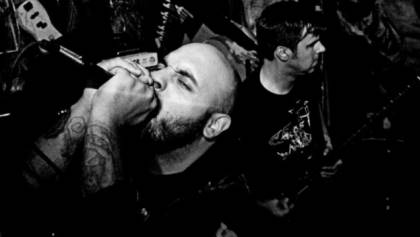 To date, they have released multiple records on such labels as Profane Existence, To Live A Lie and Cowabunga. In 2011, they parted ways with their original vocalist and added A. Jennings from WINTERS IN OSAKA, the lineup currently rounded out by bassist Kirk Syrek, guitarist Ben Gonzalez, and drummer Adam Tomlinson.

This lineup shift resulted in their most intense material to date, exemplified in a review by Grind And Punishment, which described SICK/TIRED’s May 2013-released King Of Dirt LP as “boldly striding face first into a tornado of glass shards. It’s a maelstrom of whirling slivers intent on rending your flesh, a vortex of unremitting insanity… This is simply one of the best records I’ve heard in years. It’s absolutely everything you can ask for in a grind album.” Just behind the LP the band also disbursed their most recent recordings with the Manufactured seven-inch single, which just arrived in September.

Now a part of the A389 tribe, SICK/TIRED will culminate their most unhinged, by-the-throat works to date, planning to record a new LP for the label for release in the summer of 2014.