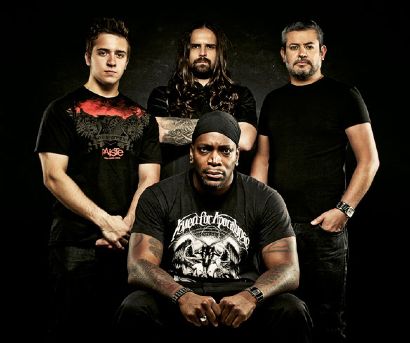 SEPULTURA have completed the recording of the new album, which is set for a fall release via Nuclear Blast Records. An excerpt from the band’s in-studio blog can be seen below:

“The recordings of SEPULTURA’s new album have come to an end. After about 40 days inside the studio of their producer, Ross Robinson, in Venice, California, the Brazilian’s have concluded the main stage in the elaboration process for the album. Now, sound engineer Steve Evetts will come into play, being responsible for mixing and mastering the effort (Evetts worked with SEPULTURA on 2001’s Nation, 2002’s Revolusongs and 2003’s Roorback). The band is already back in Brazil, where they play today in Piracicaba in the countryside of the state of São Paulo, starting a tour of Brazil which has a date scheduled for Caruaru on August 31st.”

The follow-up to 2011’s Kairos will contain nine songs, including “The Age Of The Atheist”, “Tsunami”, “The Vatican” and “Trauma Of War”, and two bonus tracks (covers of DEATH’s “Zombie Ritual” and a track from the Brazilian group CHICO SCIENCE E NAÇÃO ZUMBI). The CD will also feature a guest appearance by former SLAYER drummer Dave Lombardo.