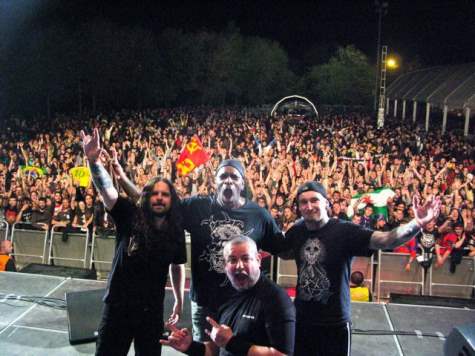 Guitarist Andreas Kisser of Brazilian/American thrashers SEPULTURA has posted the following update, recapping the band’s European tour, as well as providing a glimpse into the recording process for the next album, which is tentatively due in October via Nuclear Blast Records and will be produced by Ross Robinson:

“So, we just came back from another amazing run in Europe, the third time we do a tour for Kairos in Europe and it has been a great time. Kairos did very well for us, kept us going stronger and the partnership with Nuclear Blast proved to be a successful one. We stayed for a month doing shows at big festivals and sweaty packed clubs around the old continent playing and celebrating the 29 years of a career. But not everything was nice and easy. Our drummer Eloy Casagrande had an small accident at his drum set during a show in France. He smashed his finger on the snare and blood was everywhere. He managed to finish the set but his finger was in bad shape. He went to the hospital, had some stitches and the doctor demanded total rest. Next day, we tried to play the gig with our drum tech Dede but it didn’t work, we had to cancel the show. But fortunately our tour manager, Rienk knew a drummer that lived not far from where we were. His name was Kevin Foley. Rienk called him and next day he was with us. Kevin did an amazing job, playing Sepultura stuff from all phases and with great attitude. Thank you Kevin, you rocked!!

When we were on the road we heard about the shocking news about Jeff Hanneman, I didn’t expect that at all. My impression was that he was getting better and soon we will be able to see him killing with SLAYER again, it was so sad. The Sepultura family will miss him deeply, without Slayer, Sepultura would never be possible. Thanks for all the inspiration and the great music Jeff, RIP. Eloy had to stay away from the stage for eight to ten days but he came back to finish the tour. He came back strong and hungry, it was a great way to finish a tour right before going to the studio to record our next album. In June we will be in Los Angeles recording the new stuff with Ross Robinson and Steve Evetts for an October release. Can’t wait to do this one, is going to be our strongest work ever. We have 13 songs ready to go plus two covers, one from DEATH and another one from the Brazilian group CHICO SCIENCE E NAÇÃO ZUMBI. I will keep you all posted on the recording, DESTROY!!!”