SEPULTURA Guitarist: “The Performances Are At Their Peak” 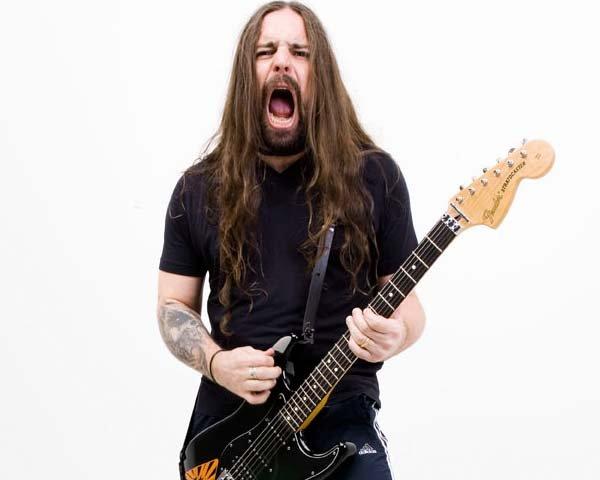 SEPULTURA guitarist Andreas Kisser has checked in with another studio update from Venice, CA, where the band is working with Ross Robinson. Here’s what Kisser had to say:

“The recording sessions of guitar and vocals are going great, I have recorded nine songs out of twelve, including the two covers. I think another two days and I will be finish with the main guitar parts, then Paulo starts his bass lines. We are in a tight schedule, we want to put the album out at the end of October so we are working daily on it. It’s an amazing process where me and Ross are creating some real nice, powerful guitars sounds, a lot of stuff that I didn’t do before, everything sounds fresh and with a lot of energy, very intense, the performances are at their peak, Ross is really pushing our abilities and feelings to the limit, we never played in such an atmosphere.

“But not everything is a bed of roses. On Thursday early afternoon, usually the time of the day when we start doing noise with the guitars, Ross went to turn on all the amps to begin the session but one of them was sounding totally different, very bad plus the room was smelling like something was burning. The amp was the “Vox” that Ross has it for so long, a very old amp with a specific important sound for what we were doing on the guitars. We had to stop the session and take the amp for an emergency repair. Luckily we are in Los Angeles and Ross managed to find an expert that could fix the amp for the next day. Also we had some problems with the vocal gear and had to replace that too. These are the things that happen in a studio that is working non-stop, with many vintage equipment that are old stuff but the best sounding equipment, is worth the effort.

“We couldn’t record one of the main guitar sounds without the amp so we went to find clean and moody sounds for specific songs and parts. It was fun to mess around on the other side of distortion. Sepultura have some clean stuff done in the past but nothing like we are doing for this specific song. We came up with some unique clean tones using a variety of guitars with different pick-ups.

“The staff from our label Nuclear Blast came by the studio to pay a quick visit. The American staff were escorting some people from the German branch trough the city cause the company is opening a new office in town. They saw me recording the song I was working on it and they heard what is going to be the first song of the album, a brutal and fast, one of the most extreme songs I ever wrote and with a performance from Mr. Casagrande that is simply monstrous. They also noticed that Derrick is singing much different from what he sang before, sounds more natural and truthful, very intense.

My good old friend Dino Cazares, guitar player from FEAR FACTORY and many other amazing noisy bands and projects, also came to the studio. He hung out during the afternoon and saw me working with the guitars and he enjoyed watching Ross with the pedals. It’s so much fun to watch Ross working on the pedals, it’s insane the way his brain works when he’s looking for that perfect sound for the part. I’m working on a small video that shows a little bit of this process, soon I will post here at the blog, DP no Estúdico com o Sepultura.

So, the amp came back the next day sounding better then ever, it was a relief to have it there as a part of the awesome guitar sound that we achieved. The vocal stuff was also working well and things were back to normal.

Here is another title that was the song myself and Derrick recorded yesterday, ‘Tsunami.’ This is another nickname that we decided to keep as an official title. Derrick was inspired by the name so he wrote the lyrics for it, part inspired by the natural phenomena and part by the “tsunami” of information we receive nowadays trough the world wide web and the media in general. A Tsunami is the most powerful force on nature, stronger than any earthquake, tornado or a storm, simply destroys everything on its path. The result is total destruction but also total cleanup, a new beginning. We pay respect to this amazing force of nature, a truly demonstration of how vulnerable we are.”