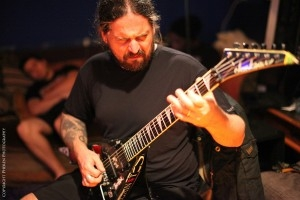 SEPULTURA guitarist Andreas Kisser has checked in with another studio update, this time, revealing a new song title, “Trauma of War.”

“So, here’s another song title for you all: ‘Trauma of War’. This will be the first song on the album and is one of the fastest and most brutal songs we ever did, the performance of our drummer Eloy is fantastic, it gave such an energy to the song that the guitars, bass and vocals had to top that level of brutality, for sure our strongest opener so far.

I wrote the lyrics inspired by friends that went to war and came back with some kind of trauma, some kind of disturbance that they have to live with for the rest of their life. When I lived in the USA I met some veterans from different wars like the Vietnam and Korean wars, they all had problems to adapt back into social life. Recently a friend that we have from Brazil came back from Iraq serving the American army, he spent time at the front and now have to live with medication and lots of ghosts in his head. At first he seems fine but when he starts talking about the experiences at the front, the nightmares and the weird behavior at restaurants and shopping malls you fell how brutal the brainwash is. It’s crazy to see families destroyed because of soldiers that cannot leave the war behind, the illusion of victory and power at the field disappears when you face the hell of the real world. This song is for them, victims of lies and destruction.”

For a full update, go to this location.