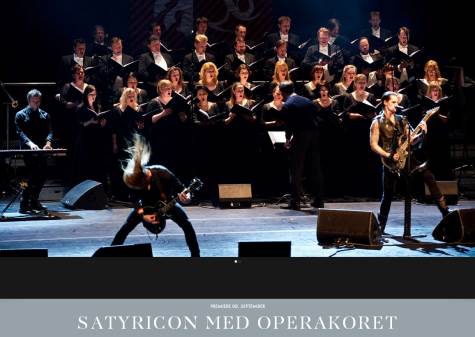 Norwegian black metllers SATYRICON have always pushed boundaries and never conformed to what was “expected.” That mindset continues to this day, as they announce a very special, exclusive show on September 8 at Oslo’s Norwegian National Opera House, where they will perform together with Norway’s 55-strong National Opera Chorus.

The special event is part of the Ultima Oslo Contemporary Music Festival, and fans of both SATYRICON and the National Opera Chorus can look forward to a very unique and exciting evening, which coincides with the worldwide release of SATYRICON’s ninth studio album, which can now be confirmed to be self-titled.

Commented SATYRICON frontman Sigurd “Satyr” Wongraven: “SATYRICON excels as a band, the bigger the platform is. In Norway, there is no greater stage than the main hall of our new Opera House. There is nowhere better suited to provide the dynamics, power and authenticity to such an occasion than the Opera Choir and SATYRICON. To us, there is no better way to celebrate with our fans that we are back with our first album in five years. We are also excited to have a couple of special musical friends come and play their part as well. Ladies and gentlemen — welcome!”

Satyricon will feature a guest appearance by Sivert Høyem, the Norwegian singer best known as the vocalist of the rock band MADRUGADA.

The band’s most recent album is The Age of Nero, which was released in 2009.