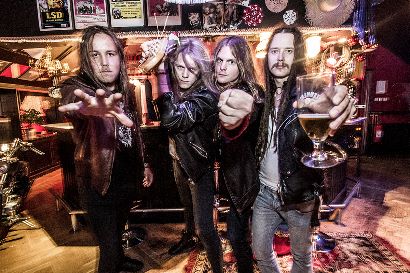 SATURN is the sound of the past, present and future colliding in a shower of riffs, melodies and otherworldly magic. “When we started we were just a couple of guys trying to have fun,” says guitarist Robin Tidebrink. “It took a while before we started to write songs and began to take it more seriously. We’re still having fun and do what we love the most, but it’s just nice that people seem to be appreciating it.”

Drawn from a steady diet of Black Sabbath, UFO, Budgie, Deep Purple, Rainbow and, perhaps most importantly, the Judas Priest of Sad Wings Of Destiny and Sin After Sin, the SATURN sound is one that declares a sincere and unapologetic debt to the greats of a bygone era, but this is no lazy exercise in retro posturing. Instead, Ascending conjures its own distinctive world of epic grandeur and gritty oomph via the dextrous weaving of ageless, hallowed ingredients and a jolting injection of contemporary exuberance and verve. Songs like “Rokktori” and “Tower Of Terror” exude both a deep affinity with the blues and an intuitive grasp of what occurred when metal’s original blueprint mutated into the tougher tirades of NWOBHM.

“We’re trying to not copy anything but of course we’re influenced by the music that we love,” states Robin. “It’s as simple as trying to create music that we would like to listen to ourselves. We are keeping it true and simple. Don’t make things harder just for the sake of it! If a track that we’re satisfied with just clocks in at two minutes, we keep it that way. We don’t have any rules or any templates to adhere to. We recorded everything except vocals live at the same time, so what you hear is what you get on a live show. If people love guitar and bass-driven heavy metal from the ’70s and mix it with blues and thrash, they are going to love what we do. Be prepared for heavy metal, blues rock and many great guitar riffs along with unique vocals!”

From the fiery clatter of opener “So, You Have Chosen Death”, through to astral mystery tour of the closing “Moonstone”, Ascending is an album that oozes a sense of timeless wonderment, as purity of intent and a fizzing, forceful delivery combine amid a batch of songs that revel in their mastery of hooks, grooves and hypnotic power.

“The lyrics try to capture some experiences in our lives and thoughts around the big questions like religion, politics and love,” vocalist Oscar Bo Valentine Pehrson explains.“Since the music is always written before the lyrics we try to capture the feeling of the song with a good title and then we mix a little bit of truth with a little bit of imagination and hopefully some lyrics will emerge!”

“It would be really awesome to get out on tour, perhaps as a starter act for another band,” Robin humbly notes. “We’re currently writing songs for album number two, so that’s in the loop. Our ambitions are just to have this band as a job and to tour the world with our music. That would be fucking awesome.” 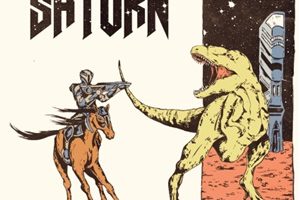