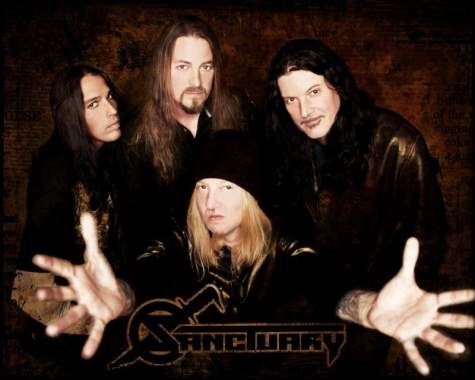 Century Media Records has announced the signing of the legendary Seattle metal and SANCTUARY. In 2010, four of the founding members, Warrel Dane, Jim Sheppard, Lenny Rutledge and Dave Budbill, came together to for a few select reunion performances. At first, it was just going to be a handful of shows, but the response and chemistry on stage was so overwhelming, the guys changed their minds. Now, some 20 years after they left off, Sanctuary will continue with their unique blend of American power metal, hard rock and progressive elements. FORCED ENTRY’s guitarist Brad Hull will fill in for Sean Blosi. The 80’s metal outfit will release a new album near the tail end of 2013 tentatively titled, “The Year The Sun Died“. ‘The World Is Wired’ and ‘I Am Low’,  two new songs from the long-awaited release were performed last year at “Bloodstock Open Air UK” and may be viewed below.

Warrel Dane comments: “Having been with Century Media since 1995 with NEVERMORE, it was a very comfortable decision for SANCTUARY to sign with them. Century Media has a great team that always delivers for all of their bands. I’ve known most of them on a first name basis for many years and I look forward to this new chapter in history.”

Lenny Rutledge adds: “I can speak for every member of SANCTUARY when I say we are all excited to join the Century Media family. We now have the opportunity to work with the best metal record label on the planet. We are looking forward to creating great music with an awesome team behind us.”

SANCTUARY released the classic albums “Refuge Denied” and “Into The Mirror Black” between 1985 and 1992. Following the band’s split, Dane and Sheppard formed NEVERMORE.

When asked about the progress of the songwriting sessions for SANCTUARY’s new CD, Dane divulged: “We’ve got so much stuff written that it’s hard to sort through, but we played two new songs [at the Bloodstock Open Air festival]. We played the one ballad, it’s called ‘I Am Low’, and we played another one called ‘The World Is Wired’. Some of the other stuff is a little heavier, but those songs, I think, are… Sometimes the stuff that isn’t as heavy is stronger, so that’s why we picked those. I don’t think anybody is gonna be disappointed, because I am involved in the creative process and I know what’s going on and I know where we’re going and I know it’s gonna be killer.”