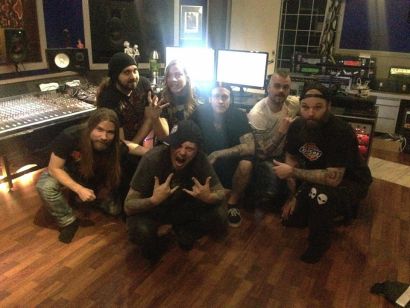 Swedish metallers SABATON are currently holed in studio to work on their next album and have released the following message:

“Hello from the studio. Today we started the recording of our NEW album! What do you think the topics of the songs will be?”

The band also announced their plans to conquer their home country of Sweden this Summer: “After more than two years in planning we can now make official what we have been working on. Next summer we will do a tour in Sweden where we will play open air shows in classical and historical arenas. The tour also includes the special show at Sabaton Open Air – Rockstad: Falun, in our hometown Falun.”

SABATON will also return to North America in 2014 as direct support to American metallers ICED EARTH on their “Worldwide Plagues North American tour”. Opening each show of the six-week trek on their North American trek will be Dutch heavy metal band REVAMP.

SABATON comments on enlisting sticksman Hannes Van Dahl: “For some time, there has been rumors about Robban [Bäck] coming back soon, or that Snowy [Shaw] would fill in for a while longer, or even take Robban’s place permanently behind the drums. To put an end to these rumors we now present our new full-time member in SABATON: Hannes Van Dahl.”