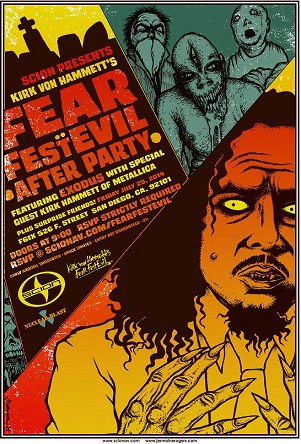 Robert Trujillo will join Kirk Hammett onstage for a special EXODUS encore on July 25th in San Diego. Details of the small and intimate club show are becoming clearer, as Kirk sat with longtime friend and writer Steffan Chirazi recently.

“One of the things when we devised our FestEvil earlier this year, was the importance of having great live bands playing after the day’s events,” commented Hammett. “We’re happy to share that pretty unique element of what Fear FestEvil productions brings to our cool horror party and events. So it’s obviously not a whole new Fear FestEvil convention, it’s just a taste of the craziness you find at Fear FestEvil…and rest assured that we are working hard on the full Fear FestEvil II as you read this.”

(NOTE: RSVP for this event is now closed!)

This special EXODUS performance will be highlighted by Hammett joining the band on-stage for a few songs.

Kirk Von Hammett Toys will also present the Famous Zombies Jr. limited edition toy at the year’s San Diego Comic Con. The very limited edition green Hammett figure will be available exclusively at San Diego Comic Con, and Kirk will be signing the toy itself at the Nuclear Blast Records/Stern Pinball/JSR merch SDCC booth 503 on Friday July 25th from 1pm to 2pm, and on Saturday July 26th from 2pm to 3pm.

Fans will be able to purchase tickets for the signing starting on Wednesday July 23rd for the Friday appearance. Once Friday’s tickets are sold-out, Saturday tickets will be released. Tickets are available at the Nuclear Blast Records/Stern Pinball/JSR merch booth (503).