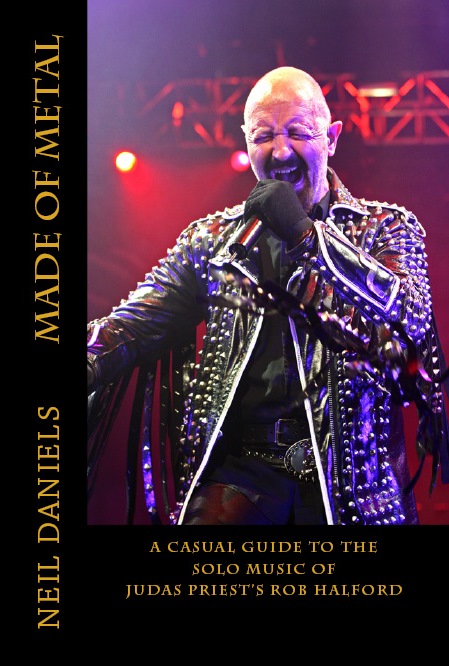 Rob Halford is a heavy metal icon and his influence on the genre is immeasurable. Bands such as ANTHRAX, PANTERA, SLAYER, and METALLICA have cited Halford and JUDAS PRIEST as a major inspiration on their own music. This book isn’t about JUDAS PRIEST as such, though it inevitably touches on the subject, but rather Halford’s varied solo music.

Made Of Metal explores the solo music of one of the greatest singers of all time. From Halford’s first post-JUDAS PRIEST project FIGHT through to his controversial collaboration with Trent Reznor with the album Voyeurs right up to his metal rebirth with his self-titled band, Halford, this handy guide celebrates Halford’s creativity and love of all things heavy metal.

From the author of the acclaimed The Story Of Judas Priest – Defenders Of The Faith, Rock Landmarks – Judas Priest’s British Steel and Dawn Of The Metal Gods – My Life In Judas Priest And Heavy Metal (with Al Atkins), Made Of Metal is the first book to exclusively explore the solo music of the Metal God himself, Mr. Rob Halford. Made Of Metal celebrates Halford’s musical legacy and offers tidbits of information and trivia about his career as well as a biography, discographies, a timeline, reviews and tributes from leading musicians and music writers. There are also many previously unpublished live photographs of the heavy metal icon.

Neil Daniels is the author of respected biographies of JUDAS PRIEST, METALLICA, IRON MAIDEN, AC/DC, and PANTERA. His books have been translated into over a dozen languages.