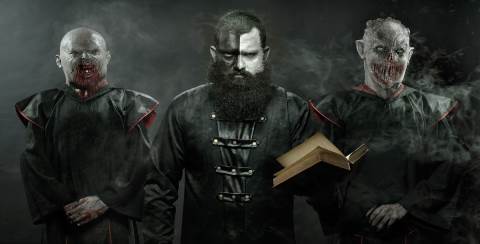 REPTILIAN DEATH, the side project of India’s DEMONIC RESURRECTION’s Demonstealer, have signed with Old School Metal Records. The band’s new album The Dawn Of Consummation And Emergence, will be released on October 10.

Commented Demonstealer: “I’m really happy and grateful to sign up with Old School Metal. I’ve known Patrick (Old School Metal Records CEO) for a while now and he’s very passionate about the music and I couldn’t have asked for a better label to release the album on. The album released a while back in India and now finally our fans overseas can get their hands on a copy. We should also be working on some dates to tour Europe in early 2014.”

REPTILIAN DEATH spent its first 12 years making sporadic live appearances and changing lineups fairly often. During that time, it had an almost humorous disposition, writing little spoof metal epics like “5 Easy Ways To Murder Someone” and “Nursery Rhymes For Satan’s Children” while balancing a handful of serious tracks which eventually found themselves on their 2004 debut, “Total Annihilation”. In 2006, the band’s direction took a turn for the serious with the release of their EP “Intestinal Feast” on the “Defaced And Split” album, which also featured EXHUMATION, WARFACE and NARSIL.

Shortly after the release, the band returned to the shadows until resurfacing in early 2013. The band exploded on the scene completely metamorphosed into brand new beast. Fronted by Vinay Venkatesh (BHAYNAK MAUT), dressed in priestly robes with his face painted half black and half white and backed by a band of masked members, REPTILIAN DEATH has moved out of the shadows and into the forefront of the global metal community.