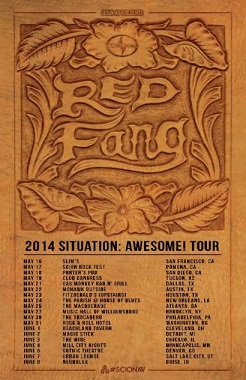 Scion Audio Visual presents RED FANG’s spring tour, Situation: Awesome!, the Portland band’s first Stateside outing this year. The one-month trek kicks off May 16th at Slim’s in San Francisco and includes a stop at Scion AV’s Rock Fest in Pomona on May 17th. Support will come from BIG BUSINESS and AMERICAN SHARKS.

As part of the Scion AV-sponsored tour, RED FANG will release a new single titled “The Meadows” in early May, with a limited edition 7” available along the tour. A video for the song will arrive during the Situation: Awesome! tour.

The band released Whales and Leeches in October, with the 11-song album quickly becoming the band’s best-selling and most critically acclaimed release to date.