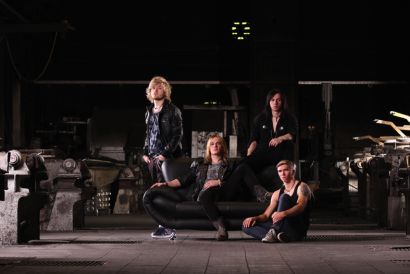 REBELLIOUS SPIRIT has released the first teaser trailer from the new album Obsession. The album is scheduled for a release through SPV/Steamhammer on 19 September 2014 in Germany, 22 September 2014 in Europe and 14 October in the USA.

REBELLIOUS SPIRIT, who caused a stir on the scene last year with their debut Gamble Shot, presenting themselves as even more confident and accomplished on Obsession. The four musicians – Jannik Fischer (vocals, guitars), his brother Jens (bass), Silvio Bizer (drums) and Corvin Domhardt (guitar) – have recorded twelve new tracks, a full dozen haunting rock numbers which document one thing first and foremost: this quartet has evolved to an amazing degree.

“The events of recent years, the production of our debut album Gamble Shot, the shows, the first tour with Axel Rudi Pell, all those things have helped us a great deal,” explains vocalist Jannik Fischer. Obsession sees REBELLIOUS SPIRIT take the logical second step, going even further in terms of toughness and dynamism. “You’ve got to bear in mind that Jannik was just 15 and I was 18 when we recorded the first demos for Gamble Shot,” Jens Fischer recalls. “Now, three years later, we’re all even better and more accomplished on our instruments, and Jannik’s voice in particular has audibly matured, which of course benefits the new material enormously.”