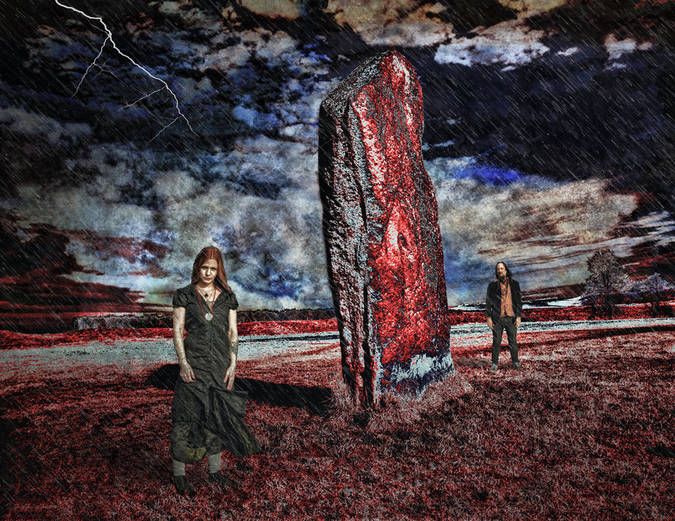 Magical and psychedelic UK group POMBAGIRA will be returning this fall with a new album to be released by SVART RECORDS. Titled Flesh Throne Press, the work will be available on CD, double-vinyl LP, and digital.

POMBAGIRA was formed in 2008 by Peter Hamilton-Giles and Carolyn Hamilton-Giles out of a desire to reset the controls for the heart of the heavy. Having set out as a more typical doom/sludge band, across the course of their previous five albums, they’ve turned their attention to exploring the psychedelic in musical composition. This was realized the most in their most recent release, Maleficia Lamiah, which received across-the-board praise for its innovative approach. This moved them away for just being notorious for their sheer volume, using a backline not dissimilar in stature to Sunn o))). Although this may not necessary be the complete emphasis for the band, they continue to be one of the loudest and most oppressive bands to witness live. However, this has been colored by incorporating a psych-o-delic light show.

Commenting on the imminent Flesh Throne Press, Peter Hamilton-Giles states, “In many ways, this album solidifies a connection between the written word composed within the Grimoire of the Baron Citadel to be published by later this year by Three Hands Press, which I am currently writing, and the ongoing ritual work to serve the forgotten and fallen. The Flesh Throne Press is therefore a reference to the visceral experience of the grave dirt that presses in on the flesh during the initiatory procedure for approaching the crossroads.”

The band feels this new album encompasses everything it has done before. But in true POMBAGIRA style, they have found new ways on how to push at the very limits of innovative music. In an attempt to bind the sorcerer to the spirit entourage that follows from taking every deviation, Flesh Throne Press explores the “nightside” like no other band.

POMBAGIRA continue to grow in stature and prowess by continuing to develop a unique sound that has as much to do with the innovation of ’60s psychedelic pioneers as it does with contemporary forms of presentation. This combined with their ongoing professional phenomenological interests in Vodou, witchcraft, and other forms of traditional religious practices, the band have managed to transcend the simple “occult rock” tag and have appeared on the other side of any clear label-making device.