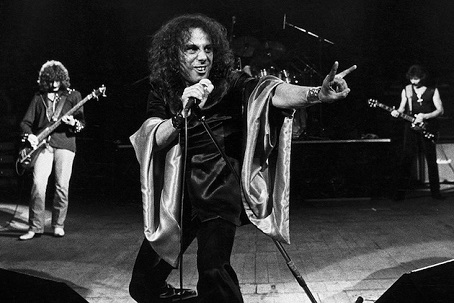 What Queensryche is going through right now via the Todd La Torre versus Geoff Tate got DR thinking: What is the best post-singer switch album to date? Now, this list isn’t all-inclusive (it would be insanely long), but we picked five albums that saw a change in singer, each with varying degrees of success.

Surely, you should be familiar with these and if you aren’t, then commence shame by listening to Five Finger Death Punch on repeat. With that in mind, cast your vote for what you think is the best post-singer switch album via the poll function below!


In search of a heavier, yet more commercial sound to compete with Metallica and Pantera, Anthrax tapped former Armored Saint singer John Bush to replace Joey Belladonna. The first album in a multi-million dollar deal with Elektra, Sound of White Noise zagged out of thrash mode for Anthrax and into accessible, but no less burly and memorable territory. As underrated of an album as there is in metal, to be honest.


Sabbath limped out of the 70’s, hopped up on drugs and at significant odds with each other. With Ozzy incapable of taking part in the writing process, he was sacked at the request of Tony Iommi. As fate would have it, Ronnie James Dio had just split from Rainbow and debated starting his own band, or joining Sabbath. Once our man Dio contributed to the early demos of “Children of the Sea,” the rest is pure metal history…


Increasingly unsatisfied with Maiden’s hardline direction on Fear of the Dark, Bruce Dickinson’s obvious disinterest and subsequent poor stage performances predicated his departure from the band in 1993. Not wanting to snag a Dickinson clone (Angra singer Andre Matos was long rumored to be in the running), Maiden handpicked Wolfsbane singer Blaze Bayley as his replacement. The X-Factor ended up bombing, as Maiden staggered through the late-90’s…


Halford reportedly faxed his resignation letter to Priest, setting off a period of activity that would last several years before Akron, Ohio cover band singer Tim “Ripper” Owens was pegged. Having beat out Halford soundalike Rolf Scheepers (later of Primal Fear) and American singer DC Cooper, Ripper’s grittier edge resulted in the very heavy, but boneheaded Jugulator. Early buzz on the reformatted Priest was significant, but it didn’t last long before pleas for Halford to re-join the fold emerged…


Max Cavalera bolted Sepultura in early 1997 over in-fighting over who was going to manage the band – Max’s wife Gloria, or an outside party. The remaining three members of Sepultura won out, with Max going on to form guerilla nu metal unit Soulfly, while Cleveland-based singer Derrick Green was selected from a vast pool of candidates. Against proved to be all over the place, with shards from Roots and Chaos A.D. never amounting more than a scattershot affair.