PARADISE LOST: Audio Samples From “The Plague Within” Streaming 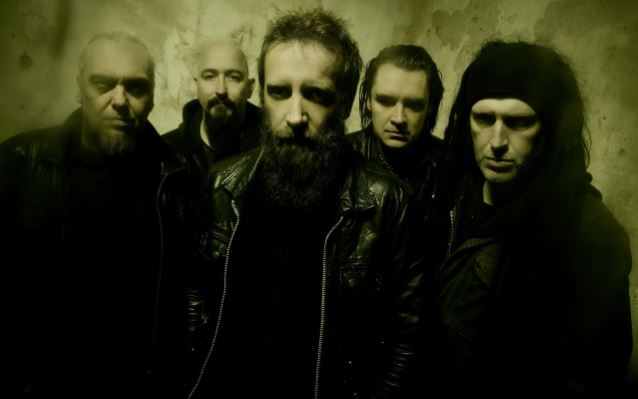 The album is due on June 2 (one day earlier internationally) via Century Media. The CD was recorded at Orgone Studios (GHOST, ULVER, CATHEDRAL, ANGEL WITCH) in London with producer Jaime Gomez Arellano.

PARADISE LOST is once again refining the chemical equation to their sonic alchemy with the kind of creative invincibility few can afford. The Plague Within is a collection of songs that will surprise even the most seasoned of fans in its ambition: a monochrome miasma of morbidly uplifting anthems and heart-aching melancholia. Theirs is a pain born of the human condition itself as our fragile minds struggle to cope in a world overrun by demons…

“It’s easy to consider songs like ‘No Hope In Sight’ as totally negative from the offset,” offers singer Nick Holmes. “This isn’t necessarily so. It just depends on how comfortable you are in yourself. As each generation comes along, we in turn shuffle nearer to the edge. It’s a potentially grim prospect, but ironically, as I grow older I am less worried about death than ever before. And on certain off days filled with bad news, misunderstanding, lying and all the horrendous pointless death in the world, I could almost welcome it.”

There’s a sense of irony in that their first album to be entirely recorded on home soil in a number of years is arguably the quintet’s coldest offering yet. Produced by Jaime Gomez Arellano (GHOST, ULVER, CATHEDRAL) at London’s Orgone Studios, the frostbitten riffs thunder beneath the bittersweet euphoria of Nick’s vocals, drifting between rich melodic soars and icy snarls. It’s an organic body of work that confronts the trials and tribulations of struggling alone in darkness, but also one that treads incredibly exciting and genuinely new sonic ground in the process.

“‘Punishment Through Time’ was the first song we put together,” explains Nick. “As usual when we begin a new album, we try to clear the slate. After 14 albums it can be difficult to know where to start, but even though it’s a distant memory, the best option is usually to think about the music we loved and excited us as teenagers and I guess this song is a result of that. With a real ’80s vibe, I think it’s the only song of its kind on the album.”

It’s this very love for what they do that has elevated PARADISE LOST to the higher echelons of metal majesty. With a longstanding stable line-up that increasingly seems a rarity in today’s music scene, theirs is a creativity born of collective dominance: a mutual and shared dedication to creating something that will stand the test of time. And, of course, we’ve grown to expect nothing less from the Great British trailblazers…

“As far as writing goes, being impulsive doesn’t always work and can be risky,” Nick continues. “But we decided to write a total doom song halfway through recording the drum parts for ‘Beneath Broken Earth’. Much to our drummer Adrian’s [Erlandsson] horror, no doubt! ‘An Eternity Of Lies’ actually took the longest to get together, with originally about 15 different versions until we settled with the final one.”

The Plague Within track listing: