PANZER, the German supergroup consisting of vocalist and bassist Schmier, best known as frontman of DESTRUCTION, guitarist Herman Frank (ACCEPT, VICTORY) and drummer Stefan Schwarzmann (ACCEPT, ex-RUNNING WILD), have revealed the cover art and track listing for their debut album, Send Them All to Hell. 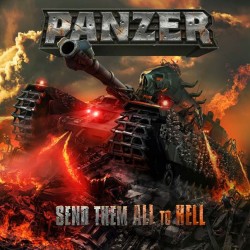