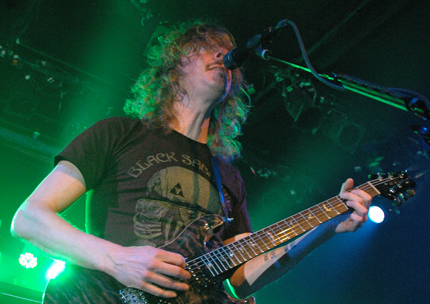 OPETH mainman Mikael Akerfeldt has issued a wrap-up of the band’s touring cycle for Heritage, which was released in October of 2011.

“Well, we just got back home after over 200 shows in support of Heritage. It’s been a fantastic experience with many odd, great, wonderful memories. Our collective brains have a lot to take in. We want to say thanks for all your support. We’ve had an amazing run, travelling around the globe multiple times to play for you guys. Ah, the memories. We’ve played in the Maldives in front of a muslim crowd. Saw women in niqab’s and burqha’s headbanding to ‘Deliverance’. Played in what looked like a rainforest fortress in Singapore.

Almost got caught in the recent Oklahoma tornados. Got snowed in in Sweden of all places. Hit my head in a bus in Minneapolis and cancelled (gasp!) a show. Stadium rock in Helsinki. Two runs in Australia, two runs in Japan. The amazing response in South America. Fucking great response pretty much everywhere. MASTODON, GHOST, KATATONIA thank you! Hecklers and obsessive fans shoulder to shoulder. Lovely North America taking such good care of us. Europe, Scandinavia took us once again under its wing. Getting pretentious now! I’ll stop! Just want to say THANK YOU! From us…Opeth!”